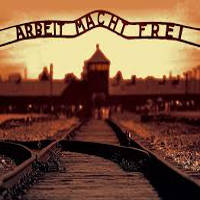 It was September 1939, an extremely hot summer.The streets of the German towns were empty, the wind was slowly swaying an old newspaper, in between the abandoned buildings. Fertility rate drop of the century – 27 flats available per each person. One could wake up in a flat in the morning and go to sleep in another, simply because he could not be bothered to make up the bed.

The cafés were almost empty. In one of them, Richard Wagner was playing his sad songs for the only two customers. Soon, he stopped playing, smacked his forehead and shouted out: Haha, Razprozak you ignorant, what am I doing in your story in the 30s? I have not been alive for several dozen of years – he duly remarked and subsequently got back into his coffin.

In Reichstag, the last three MPs accommodated the resolution, that they are taking a break for two months and going for skiing; because why would they rule, when there is not even anyone to be ruled. However, they had to turn around in the end, because August is not the best time for skiing. And only one German reformer came up with an idea of how to increase the numbers of the German nationals – he persuaded an Austrian citizen, Adolf Hitler, to move in to Germany.

Hitler agreed as he could make the painting workshops in the empty flats. Suddenly, while painting an exceptional image under the name of  “Ethical diversity is the most beautiful thing’, Hitler has came up with a crucial idea: “I know how to increase the number of people living in Germany!!!” he exclaimed.

“How, how?!” a 7-people crowd, that spontaneously appear on the square, was asking impatiently.

And not waiting any longer, he posted an advertisement in a Polish magazine, stating that Germans will take in an unlimited amount of Nazis and Anti-Semites, and every each of them will receive a free house and a bread roll, for the start.

As soon as the day after, wild crowds of Nazi tribes, living in Poland until now; started to crossover the Polish-German borders; on their way quickly learning German, from a book called ‘Nazi-German Talks’; and a week later Germany became such a strong and numerous nation, that it assaulted, the weakened by the lack of millions of Nazis, Poland and have caused the Second World War.

COME BACK! Not the Germans caused it, only the Nazis.

Nevertheless, the Nazis, in the end, must have capitulated; thus, after the war, they came back to Poland along with the Anti-Semites. The allies have decided that it will be the safest to give them up to Stalin’s control, in order to avoid them coming up again with some silly ideas such as taking over yet another country causing a war; because with this Poland, there are only problems.

That’s the way it was, I am not making up.