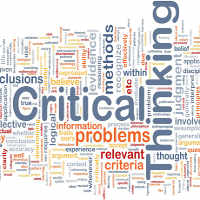 The difference between conceptual and stereotypical thinking

The difference between conceptual thinking and stereotypical thinking

Presented below is the concise depiction of what this subject concerns. We’ll be starting by explaining the most basic terms and introducing you to our perception of particular words used in conceptual and stereotypical thinking.

We use the word “term” when it has a certain meaning, as well as precise, factual and methodological definition. Term’s function is therefore cognitive, not evaluative. That’s exactly the opposite of “stereotype”.

In “stereotype” the cognitive, methodological layer is minimal and the evaluating (positive or negative – positive stereotypes and negative stereotypes) is elaborate and decisive.

For example, the word “Jew” can be a term when it’s got a particular, precise meaning or is used in sociological, religious or academic context, but it can also make for a stereotype, when it’s used in an evaluative statement of someone with anti-Semitic beliefs: “Oh, it’s some kind of Scottish/Jew!”

Stereotypes are meant to affect certain groups of people, especially those who do not demand precise information and don’t check their credibility in trustworthy sources. In order to affect or manipulate those groups, you have to know which stereotypes are deemed positive and negative by them.  The same word can be used as a different stereotype depending on the group.

For example, the word “liberal” may have both positive and negative meaning, as well as the word “cult”, which can be used as a stereotype (mostly negative) and a term. In this text, it is going to be used as a term.

Conceptual thinking is a way of thinking that relies on facts and aims for discovering the objective truth about a certain issue. A person who follows it doesn’t reject opinions that are contrary to theirs a priori, but rather tries to verify them and check them out. When they turn out to be in accordance with reality, this person is ready to change his beliefs and opinions about certain matter, to put facts and truth over their own views.

Stereotypical thinking, on the other hand, is dominated by ideologies, preconceptions, stereotypes (hence the name), and habit, etc. When a person who follows this type of thinking meets with views and information destroying his or her preconceived beliefs, he or she is ready to reject this information without verification, as well as reduce or avoid contacts with people who proclaim them.

“…By analyzing inside relations among many religious groups, you can come to the conclusion that they’re dominated by an absolute, indiscriminate obedience to some guru, leader or administrator, which is beyond dispute. Any form of questions, discussions, doubts or attempts to attain the truth is deprecated.

If I’m a teacher, lecturer or scientist, it’s important to pay attention to what kind of model of teaching I incorporate into my classes.  Do I encourage my students to think critically (though not mischievous spitting) – about the things they get from me too – to think on their own, to analyze, to look for information, to check facts in reliable sources, etc? Or do I prefer those who agree with me no matter what and never make any observation or points? It’s crucial to teach children to think on their own.”

A fragment from a book “Cybernatyka I charaker” by Marian Mazur:

The scientist looks for “truth” and is concerned about the difficulties in finding it. The doctrinaire knows the “truth” and enjoys its completeness.

The scientist thinks what science says is very impermanent. The doctrinaire considers what the doctrine says as eternal.