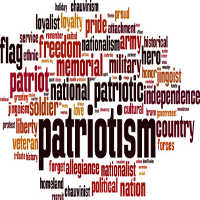 What does patriotism mean to you

What does patriotism mean to you?

Nowadays there are few people aware of semantic collapse that came as a result of our occupants’ actions after WWII. Today, nationalism is a negative stereotype, but what did it look like before the war? Back then, there were three words describing our feelings towards nations and countries:

1.Patriotism – love for our own country

2. Nationalism – love for our own nation

Poles should know this very well, because we have not had our own state for 123 years and despite that, the nation has survived as well as developed, to a large scale. The same goes for Jews, who didn’t have their own country for about 2 thousand years and yet survived. Same goes for Greeks. Today, a good example of such a nation struggling with this problem could be the Curds. It’s clear that you don’t need to be a patriot to love your nation.

3. Chauvinism – extreme, contorted version of nationalism, that focuses on putting one nation before others and disdains every other nation.

A clear example of this mindset can be Hitler’s German chauvinism, that was centered on exterminating the Jews and Slavic nations, calling these nations subhuman, and the Germans – superhumans.

After the war, semantic pseudoinformation was used. Patriotism and nationalism were combined into patriotism, while chauvinism took the name of nationalism and became a negative stereotype. That led to reduced diversification between these terms. Today few people in general use the word “chauvinism” and nationalism is almost always described as a negative phenomenon.

Here’s an example of pre-war description of chauvinism:

“Besides repulsion, I also feel anger in regard to Jews phony and despicable attitude towards national issues. This nation, complaining about other nations chauvinism, is the most chauvinistic nation in the world itself. The nation, who screams about hate that’s being aimed at it, is the one who hates the most.” – Antoni Slonimski, Jewish poet; Wiadomości Literackie nr 35, 31 august 1924

What does patriotism mean to you?

Look also: The difference between conceptual and stereotypical thinking by Andrzej Wronka